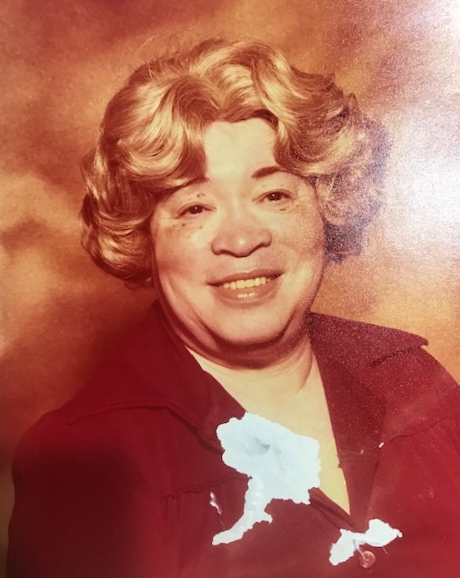 In Loving Memory of Althia Mackey

Althia Whitfield Woullard Mackey was born on August 17, 1917, in Brinkley, Arkansas to Hanible and Luetta Whitfield. She was the third of four children born to Luetta Whitfield.
Althia had accepted Christ at a young age at the First Missionary Baptist Church in Brinkley, under Reverend J.D. Humphrey. She received her formal education at Brinkley Academy High School. She attended 4 years of college in Little Rock, Arkansas. She was always very proud of the fact that while in college she interviewed the famous African American educator and activist, Mary McLeod Bethune.
After Althia left school, she worked as a public school teacher in Brinkley, Arkansas. Later she coached the Consolidated White River Academy Girls Basketball Team.
She moved to Chicago with her younger sister, Margaret ("M.C.") originally to work, but met her future husband, William (âBillyâ) Woullard as well. By 1945 she had moved to Los Angeles, California. She married Billy Woullard in Los Angeles on May 15, 1945. In Los Angeles, she worked as a seamstress. She was also a Sunday School superintendent at Evening Star Baptist Church in Los Angeles for a number of years, receiving a Certificate of Appreciation for her work with the Sunday School on March 27, 1994.
She married Columbus ("Mac") Mackey on December 6, 1968, in Los Angeles. She loved to travel, journeying twice to Jerusalem with Mr. Mackey and her church groups. Althia was a very practical woman who managed her business affairs efficiently and enjoyed arranging photos and events for her family. She handled things with love and care. She enjoyed cooking, especially for family holidays. She continued to follow basketball and sing hymns in her leisure time, as she grew older.
Althia Mackey departed this life on the morning of August 31, 2019, at 102 years of age, in Long Beach, California. She was preceded in death by her parents and her siblings: Thelma Walker, Hanible Whitfield, and Margaret Black; and her nephew, Nathan Walker.
She is survived by her niece and nephew-in-law, Minnette (Black) Murphy and William Murphy of Orinda, California, her nephew and niece-in-law, John and Carla Whitfield of Bassett, Virginia, her great-niece, great-nephews, two great-grandnephews, and a host of other relatives and friends

The family of Althia Mackey would like to thank you for the many acts of loving-kindness shown to us during our bereavement. Your thoughtfulness is deeply appreciated and will always be remembered.